New Training Strategies originated The  R.E.L.E.A.S.E. Method© to assist in healing PTSD.  It has helped many people!  See Chris Goehner’s story below. 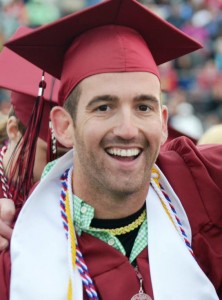 Chris Goehner joined the United States Navy as a Corpsman 18 days after his high school graduation with the desire to serve others in the medical field and was stationed at Camp Lejeune, North Carolina with the Marine Corps Second Medical Battalion. His first deployment was to the Kuwait/Iraq border providing routine clinical services. Chris later joined the Marine Corps Combat Logistical Regiment – 25 in Al Taqaddum, Iraq. During his second deployment to Iraq, Chris provided emergency medical care to more than 1,200 injured people and assisted in more than 450 operating room cases as an anesthesiology technician. The number and severity of the trauma cases he treated led to his own Post-Traumatic Stress Disorder. His symptoms worsened after his return stateside and he was later released from active duty with a medical discharge.

After struggling to reintegrate back into society, Chris continued to seek positive ways to alleviate the struggles he was facing. It was about 5 years after his medical  discharge that Chris finally found and experienced the greatest relief from his PTSD symptoms and was able to fully recover, all in part by the RELEASE Method. Within 3 days Chris was able to fully taper off all of his then six medications along with being released from the burden of meeting with his regularly scheduled social worker appointments. He went on to finish 2 bachelor’s degrees with a higher consistent grade point average than what was previously being obtained prior to the RELEASE method.

Chris credits his recovery from having gone through the RELEASE Method with Tom Kavanaugh. Through the method process he learned to fill his mind with good information by learning the skill of PhotoReading in addition to learning how to organize his thoughts with MindMapping. Chris is now living a fully productive life, working full-time traveling the nation as a campus services coordinator for a national veteran’s nonprofit organization. Because of the success of the RELEASE Method he has now been reevaluated by the US Department of Defense to be fit for full duty, which means he has been given the opportunity to return to active- duty with the same job as previously held all through the willingness to accept recovery and live a healthy productive life moving forward.